We hope you enjoy this look back as we look forward to many more years of recording the history of Wanganui Rugby Union.
We acknowledge all the information from the NZ “Rugby Almanack” Series from the season’s 1934 through to 2017 and appreciate their hard and dedicated work in providing this detailed history. – Web Admin 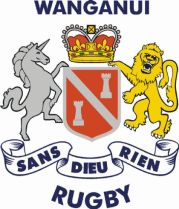 After qualifying for the Meads Cup playoffs in a somewhat fortunate fourth place on points differential over Mid Canterbury and West Coast, Wanganui then proceeded to move through the semi-ﬁnal and ﬁnal in convincing fashion and claim the Meads Cup as Heartland Champions for an unprecedented three-peat. Their considerable experience in playoff football counted for much in winning both matches at the business end against opponents they had lost to in the round robin. At their free-flowing best Wanganui crushed Wairarapa Bush and King Country but in wet conditions looked vulnerable in defeating Thames Valley and losing to Horowhenua Kapiti.

A rebuild job was necessary with a number of the 2016 lnvincibles having moved on. Asalemo Malo, Karl Parker and last year’s captain Peter Rowe all retired after the Ranfurly Shield challenge against Canterbury. Rowe had retired after last year’s Meads Cup ﬁnal but came back to play for the NZ Provincial Barbarians against the British and Irish Lions. Others not to reappear were Te Rangatira Waitokia, Kameli Kuruyubaki (both Manawatu), Kane Tamou (Horowhenua-Kapiti), Gavin Thornbury (back in Ireland), Michael Nabuliwaqa, Malakai Volau (both back n Fiji) and Tietie Tuimauga (injured).

Gains with previous first-class experience were Taione Ratu (South Canterbury) and Sekonaia Kalou who had represented Fiji at the 2011 World Cup and prior to that had played for North Otago and Otago under the name of Sekonaia Qaranaqio.

Newcomer Timoci Seruwalu was the team’s outstanding back, topping the try-scoring with nine. He was a constant threat to opposing defences and played in the ﬁnal with a well-strapped broken hand. Cameron Crowley missed early matches while recovering from injury, but by season’s end had scored ﬁve tries, showing great determination on attack and defence. Nick Harding, who had last appeared in 2012, gave good service at fullback. ﬁelding safely, tackling solidly and attacking well.

Whether at ﬁrst ﬁve-eighth or midﬁeld, Craig Clare gave some high-class displays in
marshaling the backline with good tactical sense, and experienced halfback Lindsay Horrocks was another to end the season in the ascendancy after indifferent form in the middle of the season.

Lock Sam Madams stood out in the pack for his skills in the lineout and forceful play around the ﬁeld, and with Campbell Hart they dominated the Horowhenua Kapiti lineout jumpers in the ﬁnal. Prop Viki Tofa was always good value and he was well supported by newcomer Hamish Mellow who gave of his best at all times. Bryn Hudson was a ﬁne forward at number eight.

The two experienced hookers and co-captains Cole Baldwin and Roman Tutauha passed 100 games and 50 games for Wanganui respectively during the season. Baldwin announced his retirement after the ﬁnal, having participated in all six of Wanganui’s Meads Cup ﬁnal victories, a ﬁne record.